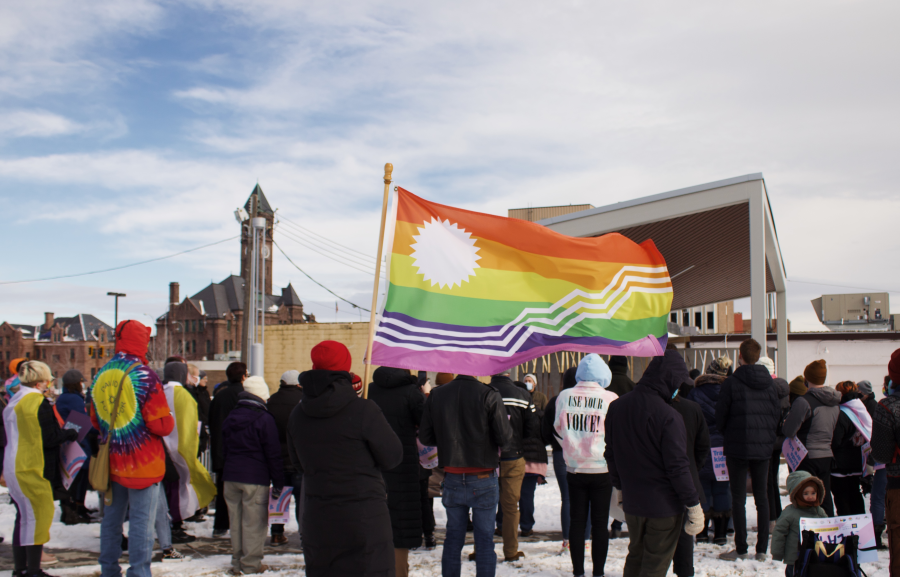 SIOUX FALLS, S.D. (KELO) — On Sunday, the Sioux Falls LGBTQ community gathered at a local church to honor and remember the lives of transgender people lost in the past year.

The Transgender Day of Remembrance event just happened to coincide with a mass shooting that claimed the lives of five people at a gay club in Colorado Springs earlier in the morning.

“We were able to kind of talk to each other and processes and things that had gone on in the past year process. The loss of the trans folks that we have lost this year. Process the events that had happened over the weekend with Club Q,” Jack Fonder said.

“One of the transgender people here in South Dakota this year that was killed was a Native American woman, two-spirit woman (Acey Morrison). So, it was really important to make sure we incorporated that into the service,” Fonder said.

In light of Sunday’s shooting, Sunday’s Day of Remembrance was “heavier” for the attendees who are targeted, Fonder explained.

“These are safe places for the LGBTQ+ community to go, but now they’re not safe anymore,” Fonder said. “They’re really being targets now, where people can, you know, spew their hate and they can do their hate crimes on, you know, a large group of LGBTQ+ people.”

Fonder added that shootings in gay spaces like Club Q or Pulse Nightclub in 2016 can discourage LGBTQ people from seeking out community in those public spaces.

“And that’s so important when you are a marginalized part of the community because you really don’t feel comfortable in every space that you’re in,” Fonder said. “And those are spaces we can go where we know will be accepted. And they are safe in other ways, too, because we know, you know, these people aren’t going to attack us for being who we are. But then, you know, when things like this happen, it really takes that safety away.”

In South Dakota, anti-transgender and LGTBQ rhetoric has appeared more frequently in state politics over the last few years.

Last week, the president of South Dakota State University issued an apology in response to a drag show hosted by the university’s Gender and Sexualities Alliance organization. The show prompted backlash from the community and drew the attention of several state lawmakers who wrongly stated that taxpayer money funded the event.

“Registered student organizations are free to sponsor lawful events on campus in accordance with SDCL 13-53-52 and applicable policy.  This event is being put on by the GSA student group and not supported by university funds,” SDSU President Barry Dunn said.

During the 2022 legislative session, Governor Kristi Noem’s bill to ban transgender girls from sports passed the legislature despite a policy in place by the South Dakota High School Activities Association for transgender athletes.

Last week in the United States Senate, Senators John Thune and Mike Rounds voted against the Biden administrations Respect for Marriage Act that would, in part, codify same-sex marriage into federal law.

“Politicians are really elevating the anti-LGBTQ plus hate and rhetoric with all of the bills that they’re proposing,” Fonder said. “Whether these bills pass or not, the fact that they’re still out there really causes a lot– We’re gonna see a lot of this, these hate crimes just be amplified, and they’re gonna, there’s gonna be an uptick in them, because the politicians really are using trans people, especially trans kids, as kind of their platform to stand on right now.”

Fonder went on to say that whether bills legislating how LGBTQ people are able to exist are in legislatures in Florida or South Dakota, the effects will be felt all over.

“Because there’s going to be folks that feel like we don’t belong here. And they’re going to feel like they should take it into their own hands to make sure that we’re not here. Which is, you know, when you see things like what happened at Club Q, because you’re seeing these things in the news, you’re seeing anti-trans bills, and why it’s bad to be transgender, and why we shouldn’t allow trans youth to transition,” Fonder said.

“We have Marty’s Closet, which is our clothing store. You can come and shop for clothes; you can work with a stylist to kind of help you out with picking out clothes,” Fonder said. “If you need help with other things. We’re definitely available to help with that, too.”

In addition to the growth of organizations like the Transformation Project, LGBTQ Pride is expanding across the state with celebrations in Aberdeen, Brookings, Pierre, Rapid City, Sioux Falls, Vermillion, Watertown and more. That shows how accepting South Dakota is becoming, according to Fonder.

“You know, when we talk about all this, this negative stuff, right, and all these bills that are, you know, being introduced, that’s just a small portion of people…,” Fonder said. “But we, as communities, the communities have changed. They have grown. They have educated themselves, and they’ve opened their hearts and their minds to really to have that community mean, yes, we are all a community.”

Those looking for support and community can check out the Transformation Project online, Fonder added.

The Colorado Healing Fund is accepting donations for those impacted by this weekend’s shooting at Club Q.