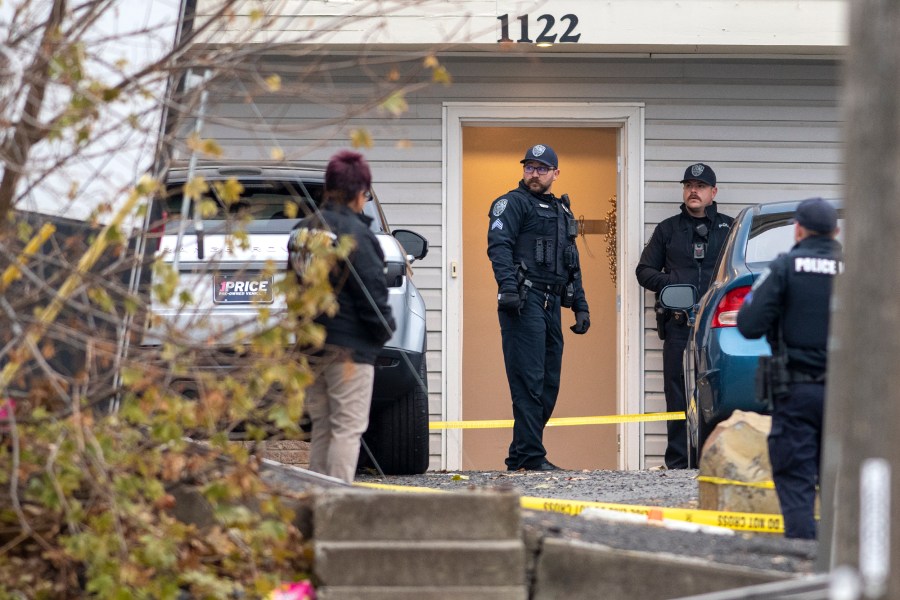 BOISE, Idaho (AP) — Authorities investigating the stabbing deaths of four University of Idaho students as they slept in a house near campus asked for patience Sunday after a week passed with no arrests and residents of this small college town remain on edge and concerned about their safety.

Authorities at a news conference on campus said they have no suspect or weapon in the Nov. 13 killings that shook Moscow, a town of 25,000 residents in the Idaho Panhandle. Students and residents have expressed concern about a lack of details from police, who initially said there was no danger to the public but a few days later walked that back by acknowledging they couldn’t say there was no threat.

“We know that people want answers — we want answers, too,” Idaho State Police Col. Kedrick Wills said. “Please be patient as we work through this investigation. We owe this to these young kids. To these young adults. We owe it to them. And we’re absolutely dedicated to make sure that that happens.”

Moscow Police Chief James Fry said authorities have received nearly 650 tips and conducted 90 interviews. Police have also requested businesses and residences in specific parts of the city to share with them footage recorded between 3 a.m. and 6 a.m. on the day of the killings.

“It’s a complex and terrible crime,” Fry said, “and it will take some time to resolve.”

University President Scott Green said instructors have been told to prepare for a possible hybrid teaching system that includes in-person and remote learning for students not comfortable returning to the campus after the fall recess, which includes Thanksgiving, ends after this week.

“While we certainly hope there’s a swift closure with the arrest of whoever is responsible for this crime, we must also be prepared for all the possibilities, including a lengthy investigation,” Green said.

All four victims were members of fraternities and sororities: seniors Madison Mogen, 21, of Coeur d’Alene, Idaho, and Kaylee Goncalves, 21, of Rathdrum, Idaho; junior Xana Kernodle, 20, of Post Falls, Idaho; and freshman Ethan Chapin, 20, of Mount Vernon, Washington. The women were roommates, and Chapin was dating Kernodle.

Authorities on Sunday said they were each stabbed multiple times, and that some had defensive wounds.

Police said Chapin and Kernodle were at Sigma Chi house on the University of Idaho camps and returned home around 1:45 a.m. on Nov. 13. Police said Mogen and Goncalves were at a bar called The Corner Club in downtown Moscow, left the bar and stopped at a food truck, and then also returned home at about 1:45 a.m.

Mogen and Goncalves also made multiple calls to a male who police haven’t identified. Fry on Sunday said police believe those calls have no connection with the killings.

Police said two other roommates who were in the house on the night of the killings had returned home at about 1 a.m. and slept through the attack, waking later that day. Police said one of their phones was used to call 911 from inside the residence at 11:58 a.m. Police on Sunday declined to say who made the 911 call, but did say additional visitors had come to the house that morning.

Police have said the two roommates were not involved in the killings.

Police have said evidence leads them to believe the students were targeted, though they haven’t given details and declined to do so again on Sunday. Investigators say nothing appears to have been stolen from the victims or the home. Police have said there was no sign of forced entry, and first responders found a door open when they arrived.

Police on Sunday also asked the public to avoid rumors about the killings and get their information only from official sources. Police have previously said online reports of the victims being tied and gagged are not accurate.

Police previously seized the contents of three dumpsters to locate possible evidence. But on Sunday, Moscow Police Capt. Roger Lanier said “nothing of note was discovered.”

Detectives have also asked local businesses if they recently sold a fixed-blade knife.

Dozens of additional law enforcement officers have arrived in Moscow to help with the investigation or with patrols, officials said.

The Federal Bureau of Investigation has 22 investigators helping in Moscow, and 20 more agents assisting from outside the area.

The Idaho State Police has supplied 20 investigators, 15 troopers for patrols, and its mobile crime scene team.