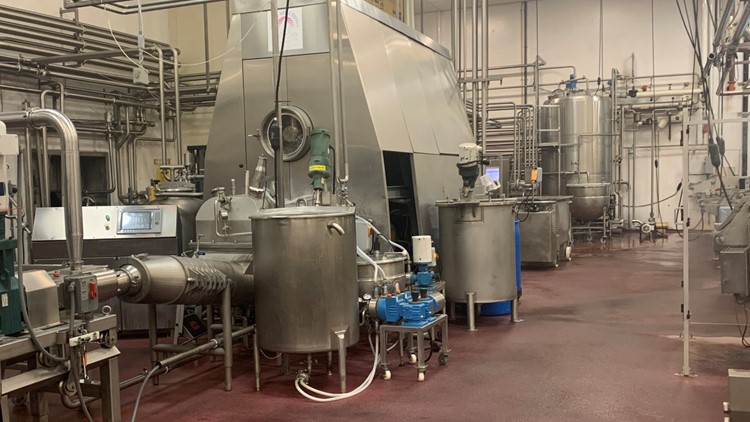 Alpenrose Dairy will move to Clackamas after purchasing Larsen’s Creamery. The relocation frees up a massive piece of prime, developable real estate in SW Portland.

CLACKAMAS, Ore. — Alpenrose, a Portland fixture since 1916, plans to move all of its local operations to a newly purchased 9-acre campus in Clackamas. Josh Reynolds, general manager for Alpenrose, said the move comes as the company acquired Larsen’s Creamery, another longtime family-owned dairy business.

“We wanted to pass Larsen’s on to another local company who shared our core values and would provide a home to our longtime employees,” said Larsen’s Creamery owner Andrew Gianopoulos.

“Not only are we adding their great butter to our portfolio’s fresh milk products, this is going to be the future home of Alpenrose because we need to relocate from our current, and very old facility on the west side of town,” said Reynolds.

The 51-acre property on SW Shattuck Road is prime real estate in Portland’s West Hills. The property, developers have estimated, could be the site for 190-some new homes.

But broker Drew Burchette of Living Room Realty says the move won’t necessarily put a dent in the housing market, since Portland has had low inventory for more than 10 years.

“By adding a couple of dozen or even a hundred, closer to 200 homes, it doesn’t really start to chip away at the giant inventory problem that we have in Portland,” said Burchette. “Especially if they are higher-end homes, it really doesn’t feed into that. But if you look at Portland, that’s one of the last chunks of land that’s developable.”

Alpenrose plans to move to Larsen’s Clackamas campus in the second half of 2023.

“We want to be right here still in the Portland area, easy to serve our key customers and remain a fixture in Portland long term,” said Reynolds.