Claire McKenna’s uncle and godfather Nigel McKenna is sharing his and his family’s heartbreak as they continue to search for information about Claire’s death in Queens in October.

“I was with my brother and Claire’s mom last night and she just starts crying. It’s hard.”

The McKenna family has been circulating posters offering a $35,000 reward for information relating to the death of 26-year-old Claire McKenna, whose body was found in Queens Village in New York City on the morning of October 12. 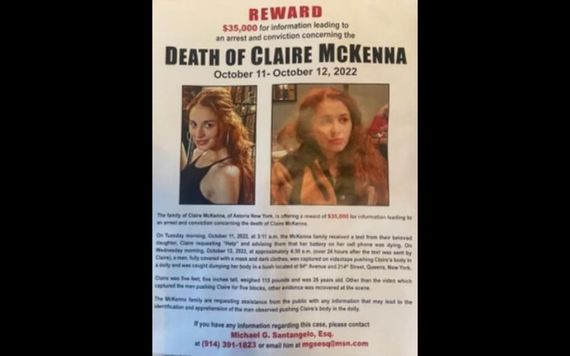 Speaking with Newstalk on Friday, Nigel gave a timeline of the events leading up to the discovery of Claire’s body.

On October 11, Claire’s texted her father at 3:11 in the morning saying “help” and that her phone was about to die. By the time Derek saw the text and called Claire, around 6 am, there was no answer.

Nigel said Derek spoke to Claire on the phone a day earlier, October 10, just hours before she was set to move into her new apartment.

“All of her furniture and everything was there and she was so excited,” Nigel said.

“But something happened that Monday after 11 o’clock, because there’s no more activity on her phone until she sent that text on the morning of the 11th at ten past 3 [saying] ‘help’ and that her phone was about to die.”

The following morning, October 12, police informed the McKenna family that Claire’s body had been found in Queens Village.

“We don’t know why she was over there,” Nigel said.

The day after Claire’s body was discovered, Nigel and Derek went knocking on doors close to where her body had been found.

“One of the houses my brother went into, the person invited him and let him know that he already had given a copy of his [CCTV] footage to the police,” Nigel said.

“It shows somebody at 4:30 in the morning wheeling her [Claire] down the street on a trolley and tucking her body, hiding it underneath a bush, like a hedge, so no one would see, find Claire.

“Claire was petite, she was beautiful, and a young chap going to school discovered her body around 9:00.

“He called it into EMS, they arrived on the scene, they checked for pulse, there was no pulse, and they pronounced her dead on October 12 at 9:27 am.”

A funeral for Claire was held in Queens on October 15.

Nigel, who noted that the family is working with homicide detectives, said he and his brother began hanging the reward posters around where Claire’s body was found about the same time that a month’s mind mass was celebrated in their native Co Louth.

The reward, Nigel said, is being offered “in the hopes that someone would come forward and give information on who dumped her body.”

Nigel said the whole situation has been very difficult for the family, which has been compounded by what the family has called “false news” in the press.

“Some of the newspapers have put out false news and then we call them and said ‘where did you get the story?’

“They didn’t get it from the police that settled it. The investigators don’t give out any information, everything’s kept sealed. It’s an open case.”

Nigel said the family – Claire’s parents Derek and Deirdre, and her three sisters – has been receiving an outpouring of support both in New York and from further abroad. While Nigel and Derek are from Kilkerley in Co Louth, Claire’s mom Deirdre is American with roots in Co Kerry.

“You’re getting a lot of support from home, a lot of people reaching out to you, sending you messages,” Nigel said. “It’s very nice, it’s very thoughtful.”

Family members came over from Ireland for Claire’s wake, said Nigel, who added that members of the New York GAA community also attended.

Regarding the response to the circulation of the posters offering a reward, Nigel says the family remains hopeful.

“We could have put up a lot larger of a reward, but we were instructed not to do so,” Nigel said.

“If you think of the person who dumped her body, these people would sell out their souls, they’re not nice people, they’re the scum of the earth.

“The posters that we put up in the hopes that one of them will come forward and talk about the other person. We don’t think this was just one person.

“We’re hoping someone will come forward and give information leading to an arrest.”