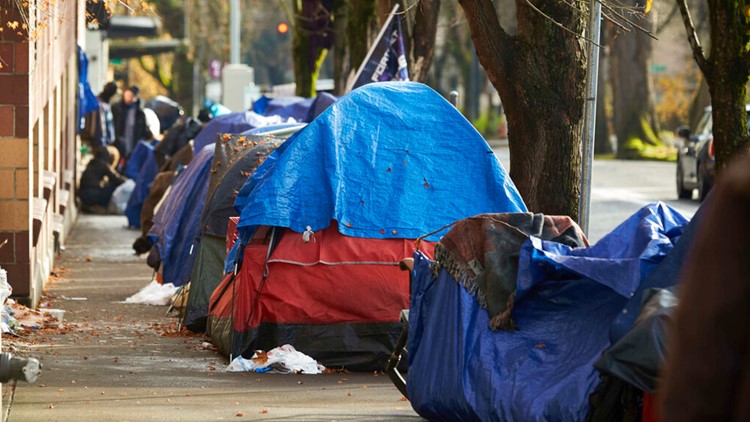 SALEM, Ore. — Signs of the housing crisis in Oregon are widespread: cluttered tent encampments in city parks, and along bike trails and sidewalks, as well as people living in parked recreational vehicles.

Sky-high property prices and a shortage of 111,000 housing units in Oregon have exacerbated the situation. Now, Oregon Gov.-elect Tina Kotek says solving the housing crisis will be her top priority.

“On Day One, I will issue an executive order to increase the pace and scale of housing production statewide, with a focus on financing housing that’s affordable for middle-class families,” Kotek told The Associated Press in an email from the campaign trail.

It’s also an issue in other West Coast states. This month in California, Democratic Gov. Gavin Newsom halted $1 billion in state spending for local governments as he seeks to reset the state’s strategy ahead of the second term that he was just elected to.

For decades, California’s state government has viewed homelessness as a local issue, giving cities and counties tens of billions of dollars to get people into permanent housing. But with high cost of living only increasing the scale of homeless encampments throughout the state, Newsom said he would pause spending. He plans to meet with local officials this month to “review the state’s collective approach to homelessness.”

This month, Portland City Council members voted to establish at least six designated campsites and to gradually ban street camping within the next 18 months. On Thursday, Mayor Ted Wheeler proposed spending $27 million to jumpstart construction of the campsites. The city council will consider it on Thursday.

The Oregon Mayors Association has asked the Legislature for $124 million annually “for this crisis to be humanely and timely addressed.” The mayors pointed out that that amount wouldn’t cover the construction of shelter and transitional housing projects statewide.

RELATED: Under Oregon mayors’ homelessness plan, state would shell out for every city

“It’s a false dichotomy that things will get better if we put shelters in while we wait for housing, because people are still homeless in shelters, people have trauma in shelters,” said Marisa Zapata, a professor at Portland State University and an expert on homelessness. “Some people don’t even want to live in shelters — they feel safer outside.”

During the gubernatorial campaign, Drazan and Johnson blamed Democrats for the problem. In a campaign video, Johnson referred to Kotek, a Portland resident, as “Tent City Tina.” In the same video she referred to Zapata, who criticized Johnson’s characterization of Portland as “the city of roaches,” as “some woke professor from Portland State.”

“It is largely a lack of affordable housing that causes homelessness. So I love that that’s top and center,” Zapata said.

RELATED: Report: Large sanctioned campsites proposed by Mayor Wheeler will be weapons-free zones and hold up to 250 people

Kotek also said that in her first month as governor, she will form a team to address homelessness among veterans, families with children, unaccompanied youth and seniors by 2025.

“I will immediately prioritize expanding managed shelters, improving access to mental health and addiction services, and getting new street outreach teams on the ground to help people,” Kotek said.

“It addresses the long-term supply side problems, which may take a decade to impact in a meaningful way,” Jones said. He also praised Kotek’s plan to increase access to shelters, substance abuse treatment and mental health services.

Kotek said she plans to travel around Oregon starting in January to talk to community leaders about issues facing the state, particularly the shortage of affordable housing and addiction treatment.

If more money is allocated to address homelessness, Zapata said that funds may need to come from other city programs. But according to Zapata, it’s not only homeless people who stand to benefit.

“When we focus on what we need to do, which is to provide housing, the negative consequences — people who are seeing homelessness or having to clean up after encampments — automatically go away.”

RELATED: ‘It sucks you in’: Portland’s homeless struggle to get off the streets despite increase in shelters