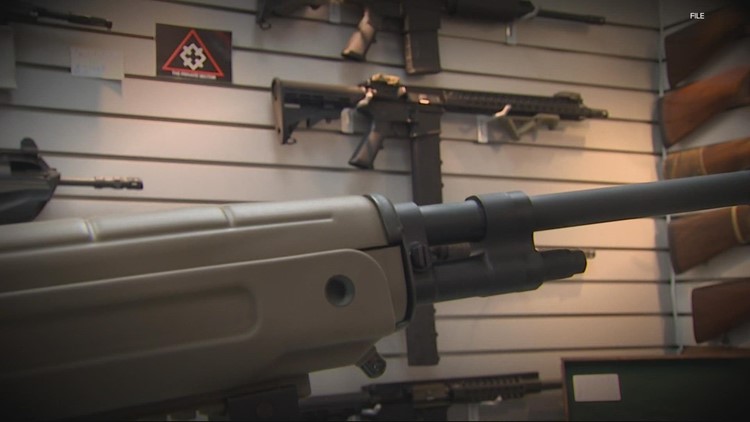 Oregon State Police said the rush is tied to Measure 114, one of the strictest gun laws in the country, which is slated to take effect Dec. 8

“Anytime you threaten people’s rights you’re going to have a problem,” said Lacasse, who owns The Gun Room Inc. in Southeast Portland. “I can’t believe that people are so stupid that they would give away their Second Amendment rights.”

Since Oregon voters passed Measure 114 last week, Lacasse said gun sales at his store have doubled, and across Oregon the number of people trying to buy a gun is soaring. Before Election Day Oregon State Police reported they were averaging around 850 background checks a day from people trying to buy a gun. That average is just over 4,000 thousand a day now; an exponential increase to an already backlogged system.

“What do you think? They’re going to take your rights away, people are responding like you can’t believe,” said Lacasse.

Measure 114 does not take away the right to own a gun. It does ban new sales of high-capacity magazines that hold more than 10 rounds, but includes an exception for those who already own those magazines.

The bigger change is the new permit process. It requires safety training, a background check and a fee — even for those who already have a concealed handgun license.

OSP is still working on a standardized permit application for it, but doesn’t have much time since Measure 114 takes effect on Dec. 8.

“If you don’t have a firearm, now’s the time to buy one,” said Lacasse.

Lift Every Voice Oregon is the nonprofit behind Measure 114. When it passed, Reverend Mark Knutson said he was humbled by everyone who helped push it through.

“Those who oppose this, we value their opinions and really want a dialogue as we move forward with this,” said Knutson. “But we did win a victory for our children and youth and for all families in this state who have lost somebody to gun violence who have been crying out please can you do something.”

Critics are discussing lawsuits that could postpone or even stop the new law from taking effect.

“You know, this thing ain’t over,” said Lacasse. “It is totally unconstitutional and we’ll see what happens.”

There’s also much debate over how officers would enforce the new gun law. The sheriffs of Linn County and Union County have both said they won’t enforce the law should it take effect.

Sheriff of Marion County said his office would not focus investigations on magazine capacity issues because of limited resources.