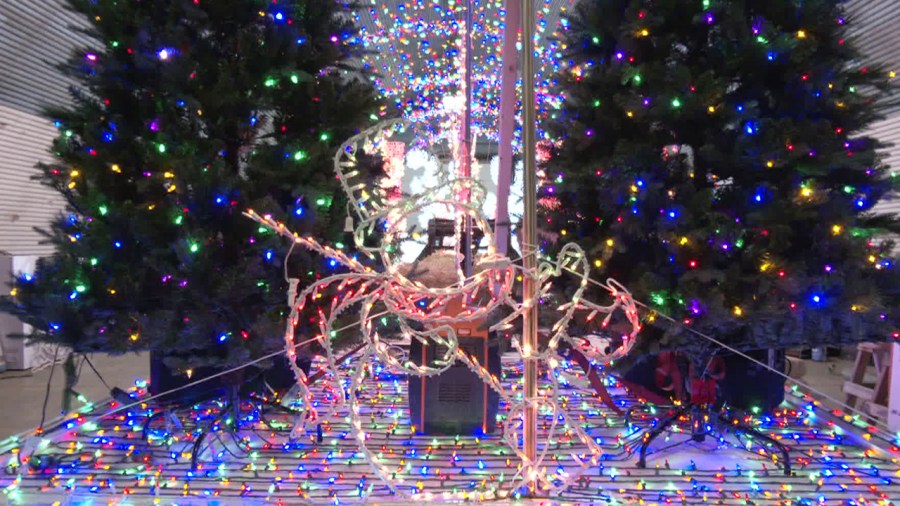 TEA, S.D. (KELO) — Local businesses and organizations are putting the finishing touches on their festive floats ahead of Friday’s Parade of Lights in downtown Sioux Falls. One award-winning crew from last year is hoping to take home the top prize again, by doubling-down on its number of lights.

Thornton Flooring & Design Center’s delivery truck has been tricked-out to look like a road-rambling Rudolph, complete with a red nose in front, and shiny antlers on top.

The flatbed reindeer is pulling a float with the theme “Miracle on Phillips Avenue,” filled with 50,000 bulbs, powered by two large generators. Thornton Flooring won the Best Use of Lights award in last year’s Parade of Lights, so this time, they’re featuring twice as many lights.

The employees with Thornton Flooring started working on the float during the first week of October. They just finished yesterday and they took the float for a test drive last night.

“We light it in stages as we’re building, just to make sure it works. But when we actually pulled it out of the building, it’s dark out and we start down the road, it’s really a joyous experience and it’s really exciting to see it,” Thornton Flooring Properties Division Manager Mike Severson said.

Downtown Sioux Falls is the next stop for Thornton Flooring’s float. And with thousands more bulbs to show off at this year’s parade, the staff isn’t taking the wow-factor lightly.

“That’s the best part about being on the float, is looking down and seeing everyone looking up going, wow,” Longendyke said.

The Thornton Flooring workers say the hardest part about building the float was untangling all those strings of lights.