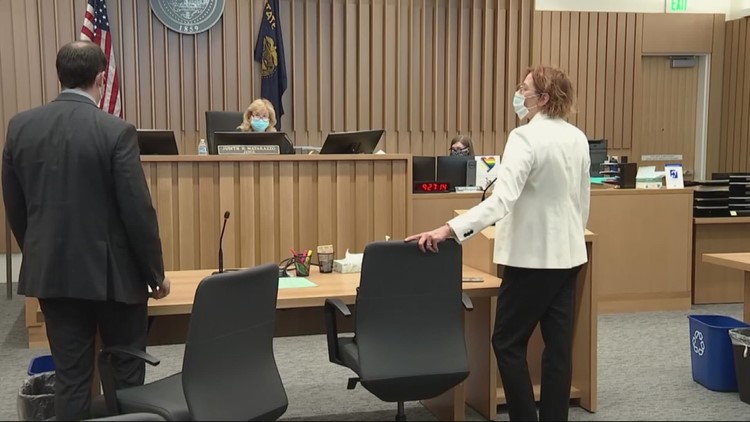 District Attorney Mike Schmidt told KGW his office only prosecutes cases when there’s enough evidence to convict. But neighboring county DAs say they do the same.

PORTLAND, Ore. — This week, KGW investigative reporter Kyle Iboshi took a look at criminal cases of misdemeanor theft in the Portland metro area as part of an ongoing series on shoplifting.

In Multnomah County, it was only 46%.

Multnomah County District Attorney Mike Schmidt told KGW that his office will only prosecute the cases they are confident in being able to win. While a reasonable explanation, it’s also the same standard that other district attorneys keep, which doesn’t explain the big difference in prosecution rates.

After the report aired Monday, we spoke to Washington County District Attorney Kevin Barton to get his take.

“That’s really just what we’ve always done out in Washington County,” Barton said in response to Schmidt’s comment. “It’s our approach really. For all crimes, we take a look at the evidence that’s available to us. And, like any prosecutor’s office anywhere in the nation, we review the evidence, and if there’s sufficient evidence to prove the case beyond a reasonable doubt, we’ll move forward on that case. That’s always been our approach with every level of crime all the way from misdemeanor theft up to murder.”

Regardless, Schmidt said that the cases that get dismissed in Multnomah County do not have enough hard evidence such as video or reports from loss prevention staff at stores.

One viewer told us, anecdotally, that police have learned that responding to crimes like shoplifting is “not worth their time,” and not worth the effort of getting video footage that could be used as evidence when they know it’s an uphill battle with the DA to get the case prosecuted.

Our previous reporting found signs that the viewer’s comment is at least partially true. A survey conducted earlier this year by the Organized Retail Crime Association of Oregon found most major retailers in Portland often don’t bother filing police reports, citing a lack of police response, a lack of prosecution, the low level of the incidents or company policy.

Clackamas County District Attorney John Wentworth suggested that the difference in prosecution rates between local counties could have to do with how a DA’s office ranks crimes, perhaps not always deeming them serious enough to be worth prosecuting.

“While I know some folks delineate between low level and high level, we don’t,” Wentworth said. “We don’t take that into consideration. So much of what makes a community safe is ensuring that when even misdemeanor crimes are committed, that we make sure that those matter. If there is a movement or a thought of having misdemeanors (be) not prosecutable or not investigated by the police, that impacts livability for everyone and sends the message that even the commission of higher crimes is going to be accepted, and we just don’t — we don’t do that in Clackamas County.”

Barton had a similar take, indicating that a difference in philosophy on prosecution can make the difference.

“Well, I can’t speak for what’s wrong in Multnomah County — and clearly something is wrong there,” Barton said. “What I can say is we all apply the same laws: The same criminal laws apply everywhere in Oregon, the same rules of evidence in court apply everywhere in Oregon, and what you have sometimes is a difference in philosophy with the leaders in various communities.

“I can only speak for my community and I can say that the police chiefs, the sheriff, in my office itself, we all prioritize accountability. We also prioritize making sure that we enforce what I call ‘quality of life’ crimes. If you are a business owner and you’re a victim of shoplifting, that’s a significant issue that you’re dealing with. If you are a regular person on the street and your catalytic converter has been stolen or your car has been broken into, that’s a significant issue to you.”

When Mike Schmidt took office as Multnomah County District Attorney, it was at the height of Portland’s racial justice protests in response to the murder of George Floyd. He inherited an understaffed office with hundreds of backlogged protest-related charges referred for prosecution, and he made the controversial decision to dismiss all of the lowest-level charges. He’s also been very public of late about his office’s struggles with Oregon’s shortage of public defenders, which results in cases getting dismissed or languishing in the court system because defendants cannot get adequate representation.

Schmidt ran on a progressive platform that centered transparency and reforms to make the criminal justice system less punitive, but he did not cite a desire for clemency as the reason for Multnomah County’s lower prosecution rate when it comes to petty crime — and he insisted that his office does not have any policy against prosecuting these cases.

A number of viewers also asked: Since KGW was able to obtain and compare prosecution rates from the three counties, what about the conviction rates? That data would, theoretically, show whether Schmidt is right, because his office’s preference for slam-dunk cases would presumably result in a higher conviction rate for Multnomah County. We are working to get that data from all three district attorneys.

Iboshi’s investigative report on Monday produced two telling pieces of audio. Both related to suspects who were arrested for minor crimes and then learned that they were not in Multnomah County — and reacted with major disappointment.

Barton and Wentworth, whose jurisdictions were featured in those two clips, were pleased that the suspects know it’s best not to be arrested in their counties.

“Well, of course I have a certain amount of pride in knowing that among those who would otherwise decide to come into Clackamas County and commit crime, that they know that they’re not welcome and that we are going to hold them accountable and that we’re going to pursue the case as vigorously as we can,” Wentworth said.

We asked Barton and Wentworth for their opinion on whether some defendants should be given a break, as many people involved in petty theft are likely doing it to feed a drug habit or may struggle with mental health issues.

“Well, when people make the voluntary decision to commit a crime, to engage in a criminal act, they should be held accountable for that,” Barton said. “But that doesn’t mean that we don’t take into account other factors that may be present — and oftentimes these days, addiction and mental health issues are clearly present, and so we have an abundance of specialty and treatment courts in Washington County that really make a huge effort to try and address the root cause of crime. But at the end of the day, if someone makes the decision to go out and commit a crime — whether they’re doing it because they are greedy or they’re doing it because they’re feeding a drug habit or they’re doing it for some other reason — we believe that accountability is key factor and that starts with prosecuting them for the crime they’ve chosen to commit.”