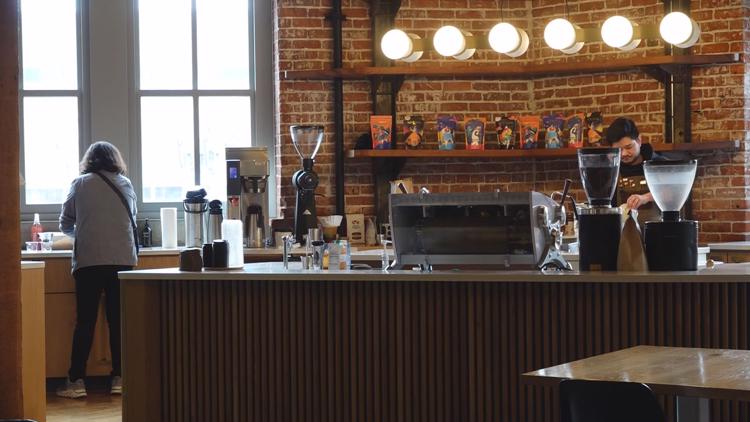 The coffee shop, Electrica, is one of many businesses owned by Angel Medina and Republica and Company Hospitality Group. One other location will open next week.

Electrica is inside the Schoolhouse Electric & Supply Co. building on Northwest Nicolai Street, off of Highway 30.

The coffee shop is the seventh business by restauranteur Angel Medina and the Republica and Company Hospitality Group in two years.

Republica Co. already has two other coffee shops, La Perlita and Esperanza, in Northwest and Southeast Portland. The group’s biggest presence though is in the North Park Blocks, where they have La Fondita restaurant, their new Bar Comala, and a new bakery, Matutina, set to open next week.

The North Park Blocks— in Portland’s Old Town which has struggled with crime, graffiti and trash — is an area that the group is determined and committed to invest in, Medina said.

RELATED: ‘We can’t walk down the streets’: Old Town residents fear for their safety as city gives update on 90-day reset plan

“I know how important our presence there is, not just for that part of the city but also for brown folks — really for all BIPOC folks — because we need to see more of us in positions of change and positions of being able to influence the way that the city looks,” he said.

Representation is another area Medina and Republic and Company strive to improve. Most of their employees are people of color, and the group’s business model is a community-ownership approach that gives co-ownership to their chefs.

The next venture for Medina and the Republica and Company group? North Portland, as they target the St. John’s neighborhood — though what that business will be is still unclear.

“We keep going back and forth as to what that is supposed to be. We’re at the point where we know we want to do something special for the folks in St. Johns, and continue to tell these stories by way of food and hospitality,” he said.