A number of rare items from the Titanic are set to go up for auction, including a photograph of the ship’s Irish purser Hugh McElroy on deck with a parrot in 1910.

A deckchair that was removed from the ship by a member of the press while the Titanic was docked in Cork and a pocket watch that stopped at the exact moment that its owner went down with the ship are also going under the hammer.

The photograph of McElroy, who is pictured holding a parrot on board the Adriatic in 1910, is up for auction at Henry Aldridge & Son in Wiltshire on Saturday.

McElroy was transporting the parrot to the US on behalf of Joseph Finley, who had to take a sailing a number of days after the Adriatic departed.

Finley remarked that he gave McElroy the parrot and taught him how to use the bird to send wireless messages from the Adriatic.

“I gave him the parrot, and telling him the trick of the parrot imitating the tapping of my fingers. It was found that he would tap the wireless key on the Adriatic just as regularly and as precisely,” Finley said.

“As a result of some experiments, the parrot was found quite competent to send wireless messages without the regular operator touching the key, the bird simply following each tap with… his imitation of the dots and dashes.

“I was highly gratified in getting a wireless message, which was sent ‘Via McElroy’s Parrot’ as the messages stated.”

The photograph is expected to fetch between $600 and $1,000 at Saturday’s auction.

Henry Aldridge & Son is also auctioning a rare pocket watch that stopped working at the very moment its owner Oscar Woody went down with the Titanic.

The incredibly rare item, which was found when Woody’s body was recovered 10 days after the Titanic sunk, has an opening bid threshold of $100,000. 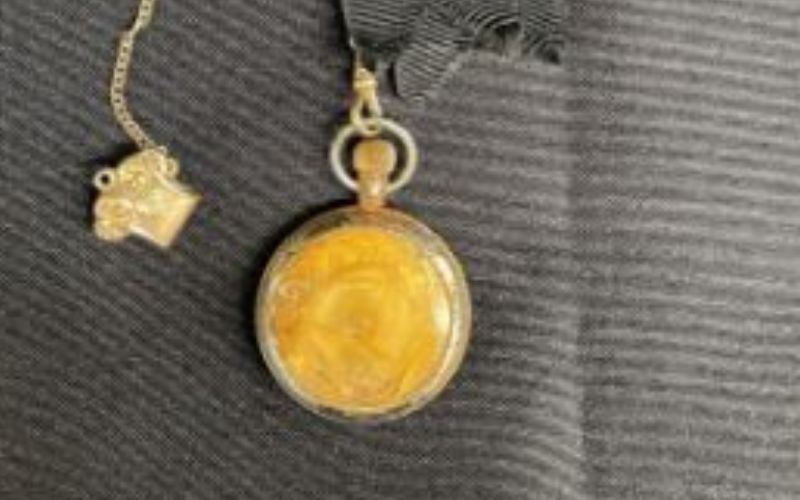 Woody, who served as Postmaster on board the Titanic, made a futile bid to save hundreds of mailbags by carrying them to the upper decks after the ship hit an iceberg on April 14, 1912.

His gold-plated Ingersoll watch and chain were damaged as the disaster unfolded, leaving the glass screen smashed and the hour and minute hands snapped off.

However, an imprint showing that the minute hand was pointing between 4 and 5 when the two hands were snapped off, lining up almost perfectly with the official time of the Titanic’s sinking at 2:21 a.m. on April 15.

The watch was given to Woody’s widow Leila, who later passed it on to his masonic lodge. It is currently in the possession of a private collector.

Auctioneer Andrew Aldridge revealed that the watch had been receiving a lot of interest in recent weeks.

“This is probably one of the most iconic and important items of Titanic memorabilia offered for auction in recent years,” Aldridge told the Daily Mail.

“The watch is frozen in time capturing the moment Oscar went into the cold north Atlantic.”

The two items are set to go under the hammer on Saturday, November 19.

Meanwhile, a deckchair removed from the Titanic in Cobh by Cork Examiner photographer Thomas Barker is also going up for auction at Heritage Auctions in Dallas with an opening bid threshold of $45,000.

A letter written in 1959 explains that Barker was given the deckchair as a gift after remarking that he would love to use the chair in his garden during the summer.

Barker gave the chair to his maid Patricia O’Brien after hearing about the tragic sinking of the Titanic and the relic eventually made its way to England with O’Brien’s daughter Judith Barrow.

Barrow sold the deckchair in 1959 and wrote a short letter about its history.

“My mother was Mrs Patrick O’Brien and in 1912 she worked as a housekeeper in Queenstown… to a senior employee of the local newspaper,” Barrow wrote.

“After the terrible story came through that the ship had sunk with such a terrible loss of life, Mr Barker said he didn’t want anymore to do with the chair as it reminded him of the many lovely people who had perished in the tragedy.

“He was going to break the chair up and dispose of it.

“But my mother asked if she could have it, to which he immediately consented. It remained in our house ever since. And I used to play with it with my brother until I realized what it meant.”